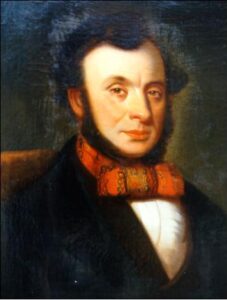 Sam Oddy, painter and decorator and sometime publican, 1813-1876Sam Oddy and his sister Sarah were the only (lawful) children of William Oddy of Gildersome, publican, 1786-1820.  They were the grandchildren of George Oddy, cooper of Gildersome, who took responsibility for them on the death of their father, who had been a widower.  When George signed the deed in 1820 for caring for his grandchildren, he had as guarantors Joseph Webster of Farnley, Leeds, farmer, and John Westerman of Gildersome, cotton manufacturer.  {NB were Joseph Webster and John Westerman relations of George Oddy?}

I also think that George Oddy, cooper, the grandfather, married Mary Ainsworth on 18.3.1775 at Halifax

Sam Oddy(1813-76) and William Oddy (1840-1908) are buried in a family tomb in Undercliffel cemetery, Bradford, along with assorted members of the family.  Sarah Oddy (1815-1888) died at Bridlington Quay.  She is mentioned on the family tomb, but I cannot remember if she is buried there.